My guests today are Robert .F Kennedy Jr and Anita Roddick.  Robert Kennedy speaks about crimes against nature the article he wrote for Rollingstone in 2003 and the book that was published with the same title in september 2004 and the subtitle: How George W.Bush and his corporate pals are plundering the country and hikacking our democracy. You can also listen to him weekly on Air America’s Ring of fire. 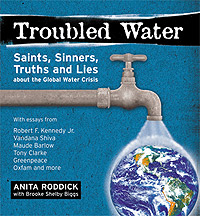 Our guests today are:

Paul Loeb, author of The impossible will take a little while: a citizen’s guide to hope in a time of fear