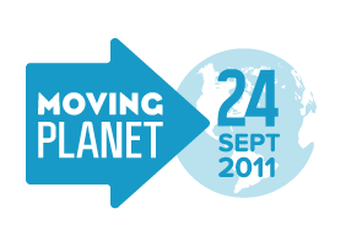 Fresh from the success of the two-week Tar Sands protest outside The White House, 350.org Founder Bill Mckibben is catching his breath before gearing up for his next mega-event; Moving Planet, September 24, a worldwide day of action to combat climate change apathy!
350.org’s U.S. coordinator, Molly Haigh, discusses what’s being planned and how you can participate.

Jorge Madrid: Energy Efficiency Must Have a Starring Role in Putting America Back to Work

Jorge Madrid, Research Associate for the Energy Team at Center For American Progress, talks about his just released article on how energy efficiency can play a starring role in America's economic recovery and how to make it happen!

Arrests: 706. The largest civil disobedience for climate change continues in front of the White House

Nasa’s climate scientist, James Hansen, and actor-activist Darryl Hannah are among the latest demonstrators to be arrested outside the White House where the Keystone tar sands protest is in its second week. We’ll talk to two other notable arrestees about the importance of President Obama’s upcoming decision on the Canada-to-Texas pipeline: CREDO’s CEO, Michael Kieschnick and Elijah Zarlin, also of CREDO. Zarlin’s arrest is significant because he was Obama’s paid Chicago fundraiser, raising millions on the internet for the 2008 campaign. Hear what he has to say about what’s on the line for the Obama administration.

Blogger D.R. Tucker joins me to give his top picks for most absurd and atrocious comments and coverage on the climate front this week!

Roger Shamel of the Global Warming Educational Network (GWEN),checks in to tell us about their "Go The Limit" campaign, a CO2 reducing activity that all Americans can engage in – we'll tell you how – and their efforts to get President Obama to issue a "State of the Climate" address. Roger and his wife Susan will also be participating in the Tar Sands protest, continuing outside the White House.