Dallas, We Have A Solution — How the Largest Earth Day Event is Tackling Some Texas Size Problems 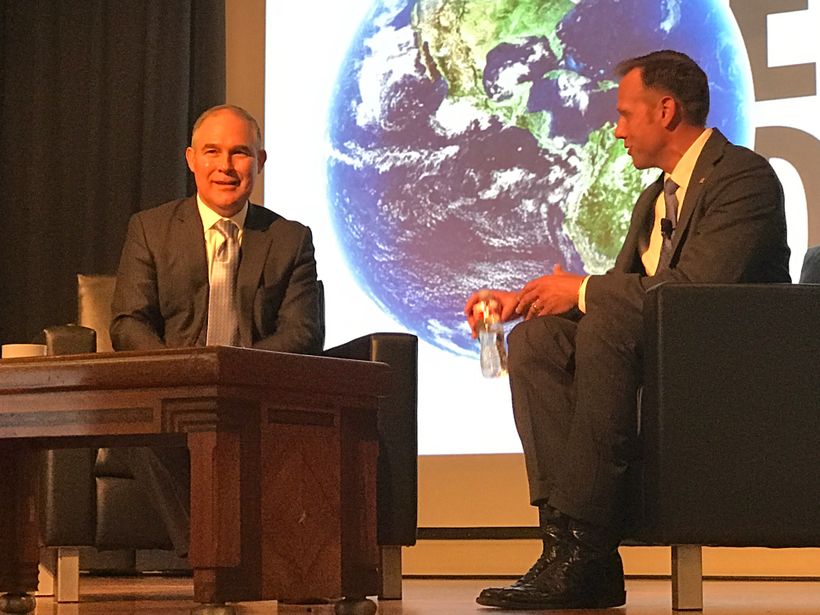 Earth Day Tx was so many things, many of them firsts for me. That’s why it’s taken this veteran green journalist-turned-advocate two weeks to fully process the rare and timely experience, enough to be able to write about it with proper perspective.

For starters, the founder of what began in 2011 as Earth Day Dallas, is an anomaly. Trammell S. Crow is a Republican businessman, arts patron and philanthropist, the son of his namesake who was one of the nation’s most successful real estate developers. Crow is also an environmentalist, perhaps the most interesting one I have met – and I’ve been interviewing thousands of eco-notables since Earth Day 1997! Among my favorite guests were those who were unexpected like Republican conservationists. Topping that list were Ted Roosevelt IV, Bob Inglis—the South Carolina congressman who was voted out of office in 2010 in part due to his growing concerns about climate change—and Martha Marks who started Republicans for Environmental Protection (REP) 20 years ago. I started reporting on environmental news because it never made sense to me that issues so essential to ALL of us should be politicized and marginalized—relegated to eco-activists.

That’s why I was intrigued by Crow, who told me in an interview on opening day of what was, on Friday, Earth Day Texas--and has now morphed yet again into the broader EARTHx—that his green leanings took root in his backyard as a pre-teen. The now gray haired, pony-tail-sporting enigma is still motivated by his backyard, he wants to “keep it green.”

That is where and when Crow says his older brother first uttered the word “environmental.” Crow’s sibling grew up to be a builder like their father, but not a green builder, Crow added as if reading my mind—no LEED designations anywhere in his developments—but the younger Crow grew up to love nature, nurture it, and grow increasingly concerned about the fate of our planet if we continue with business as usual. Over the years he tried to talk to fellow Texans—especially Republicans—about climate change, the endangered Monarch butterfly and countless other threats to our eco-systems, but that wasn’t enough.

In 2011 Crow put his money where his mouth was to create what is now his baby, his passion, and likely, his legacy. In his own words, well-seasoned with a Texas drawl, “the awareness level in Texas was so so low that I wanted to help that along.”

I first heard about Crow from Bill Shireman, himself a Republican businessman turned sustainability leader. Shireman founded Future 500 in 1995 and has been bringing corporations together to get serious about greening their bottom lines—in the eco sense, as well as dollars and cents—moving towards what is now generally known as the “triple bottom line.”

Several years ago Shireman, who was another of my favorite guests, wrote about how Trammell Crow was gathering green business leaders, environmental activists, innovators and investors to begin building what would immediately become the largest Earth Day event in Texas, and later the U.S. After all, Crow is a Texan, so of course he’d set out to make the event the biggest and best! It was Crow’s ambitious goal to bring the top influencers from the sustainability community together to address the most pressing environmental problems—by 2020—that got my attention. What kind of crazy optimist would put that mission impossible out there for print, and in such a short time frame? Did he know something I didn’t about our ability to address the complex challenges of climate change, coral and bee die-off, sixth mass extinction underway, warming oceans, deforestation and so much more? Or, did I know too much to do anything but laugh at that audacious target? Given Crow’s track record of business and civic leadership, I was determined to find out.

This year, with President Trump leaving so many of us who care about what’s happening to nature—our life support system—discouraged, depressed and even despairing about our ecological future, I decided it was time to make pilgrimage to Dallas. I had to see and hear for myself how Crow was doing with his moon-shot goal to save Mother Earth, now just three years shy of 2020, or at least to begin turning the tide. His approach, like Shireman’s, to inspire leadership across party lines and sectors, is so clearly needed now more than ever to rise about the noise.

My first glimpse of him was shortly after arriving onsite, at the Texas fairgrounds. The event’s communications director was showing me around the vast exhibit hall when we suddenly spotted him, moving through the crowd with his team, seemingly creating his own weather system. You could almost feel the energy as the crowd parted to make way for Crow as he bobbed and weaved, even walking backwards for a few seconds while continuing to talk, and listen, to his clipboard-toting entourage. My initial impression was that of witnessing a whirling dervish, looking more like a social change agent than an heir to a development fortune. That’s what makes him so intriguing: he is both of those—and more.

When we sat down to do an interview a few hours later it didn’t take long to pick up on his dry sense of humor and deep-voiced Southern gentlemanly charm. Among the questions I could not wait to ask: how was he doing on that 2020 goal and, as a Republican environmentalist who cares enough to gift this event to the people of Dallas, how does he feel about Trump and his cabinet picks rolling back progress? As if I was not curious enough, fellow Texan and former Governor, now Energy Department head Rick Perry, was the speaker at lunch. Even more stunning, EPA Administrator Scott Pruitt, was expected later in the afternoon. He is public enemy number one, in the eyes of many a climate activist, especially since famously telling CNBC’s “Squawk Box” in March that he did not believe greenhouse gas emissions were a primary contributor to climate change! I couldn’t believe he was appearing on the same day Congress’ top climate advocate—Senator Sheldon Whitehouse, Democrat from Rhode Island—had kicked off the event with his usual full-throated call for action on the twin climate and ocean crises. Talk about whiplash! The political juxtaposition was both unsettling and fascinating.

In response to both inquiries, Crow ducked—saying, in essence, we’ll have to see—but he did it in such a charismatic way that I didn’t have the heart to grill him on what would seem to be some supreme cognitive dissonance, both in terms of solving the environmental crises by 2020 and having Perry and Pruitt—climate activists’ worst fears embodied—there to speak, on Earth Day no less. Although it did not come up in our interview, I later read that Crow does, in fact, have specific markers in mind for the global companies, influencers and investors he has organized, over the next few years leading up to “The Earth Day 50 Challenge.”

Perry and Pruitt did not disappoint. After listening to each closely I came away with the same impressions of them that I had going in: of Perry as an affable enough but somewhat clueless politician—who famously forgot the name of the department he would go on to run, during the 2012 Presidential election—and Pruitt as a smooth, slick, and smiling fox in charge of the henhouse he sued more than a dozen times while Attorney General of Oklahoma. Strangely, in his short talk, he continuously repeated the line “We don’t have to choose between jobs and the environment,” a line borrowed from Democrats who have had to correct Republicans—whom, to this day—repeat that nearly every time regulations to safeguard protections are criticized as “job-killers.” Their double-speak spin strategy makes my head spin and blood pressure rise.

During Pruitt’s talk several protesters stood up and shouted at him, one calling him “a monster” whose administration, by rejecting the abundant evidence of human-caused climate change, is “gutting the EPA and condemning everyone in the future to a world of hell.” As he was being escorted out by Pruitt’s security guards (he reportedly now has eight to ten on staff) the heckler shouted to Pruitt, “How much money are you being paid?” It was a dramatic moment that underscored the wonderfully incongruent nature of an event that brought together high-level Republicans in an anti-environment administration with climate concerned activists and green-leaning folks of all shades. I couldn’t swear on it but I believe neither Trump’s energy nor environment chiefs ever mentioned the words “climate change,” a double sin of omission on the role of carbon emissions.

On more than one occasion I heard organizers state their event was “unobstructed by politics and fueled by community energy.” A noble slogan and goal, and to a great extent manifested from what I witnessed. In this heated national moment of polarized politics—while the polar ice caps melt—the stakes feel unusually high so it did not surprise me to see some raw emotions surfacing. Especially on Earth Day when hundreds of thousands of Americans marched for science, including thousands who culminated the Dallas demonstration, appropriately enough, at the 200+ acre Fair Park site.

I give Crow and his team kudos for attracting so many Texans, and beyond—from the eco-curious to the converted choir—and bringing together “unlikely bedfellows.” Although I was too busy attending talks, watching green films (more about that in Part 2) and doing interviews to interact with many attendees, the numbers speak volumes. With some 400 speakers and 130, 000 in attendance last year with nearly that many this year, Earth Day Dallas-turned Earth Day Texas—now renamed the simpler “EARTHx”is by far the largest such event. When you consider the more than 900 exhibitors and 1,700 booths, you begin to get a sense of the range and impact of this Expo.

Clearly Trammell S. Crow has created something unique and lasting, a real world example of the oft-used phrase, “conservation begins in your own backyard.” However, Crow and his team do not want it to end there. They want attendees to take what they’ve, seen, heard and experienced back out to their communities and to engage with it. Then they hope attendees will come back for more of what Crow calls “saturation” next year, bringing family, friends and colleagues to fill up their “empty sponges” with information and inspiration.