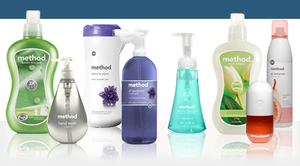 Method
Products has made a name for itself designing household cleaning
products that are not only green but also cool-looking enough to
display above the kitchen counter.  Betsy talks with co-founder and "chief brand architect" Eric Ryan. Listen now…

Because we all contribute
to global warming, be co-dependent no more:

1st Step: Admit
you are powerless over your addiction to using energy
and that your high energy use has become unmanageable, and then
change 10 light bulbs in your house to
compact florescent bulbs. Taking this first step
saves 1,795 lbs of carbon dioxide per year!

2nd Step: Come to believe that a power strip turned off can
restore you to sanity. Turn off your power strip when not in use and
save 300-500 lbs of CO2 output per year!

3rd Step: Make a decision to turn your water heater down to 120
degrees, and turn your will over to the care of the planet, as you understand
it. This step saves 550 lbs of CO2 per year!

4th Step: Take a searching and fearless moral inventory of yourself
and then wash out the waste in cold-water laundry. Save 1,533 lbs of
CO2 per year!

5th step: Admit to yourself and to
a human witness the exact nature of
your true driving needs (how often do you drive the
entire soccer team around?), and drive a more fuel efficient
car (increase of 3 mpg) will save 2,400 lbs of CO2 emissions per year,
and save getting hosed at the pumps!

6th Step: Take an oath that you are entirely ready to begin composting
25% of your garbage. Save 1,040 lbs a year!

7th Step: Humbly wrap your heater in an insulation jacket. Save
1,000 lbs!

8th Step: Make a list of all your errands; become willing to
combine them on the same trip, and drive 10 miles less a week. Save
500 lbs per year!

10th Step: Take personal inventory of your appliances and unplug
them when they are not in use. Save 300 lbs a year!

11th Step: Seek through prayer and meditation to
lighten your footprint on the planet and clean the coils in your refrigerator
twice a year. Saves 651 bs of CO2 per year!

12th Step: Having had a spiritual awakening as the result of
these steps, resolve to take this message to other energy addicts, and
to practice these principles in all
your affairs. And if you get really motivated, switch to solar power.
It’ll save 5,749 lbs of CO2 output a year!

Powering the planet (pdf) is the title of the inaugural speech given by Nathan Lewis at the California Clean Innovation Conference. At this point we don’t have a recording.

This is a rerun of our April 30 program:

The San Francisco Chronicle about EcoTalk: Environmental radio show hopes to flourish — but it needs a lot of green

Read it all in Joe Garofoli’s chronicle with a series of photos by Christina Koci Hernandez.

Betsy Rosenberg is a longtime Bay Area radio journalist who has spent the
past few years working to keep her nationally broadcast environmental program
on the air. She also has emptied her six-figure retirement fund to do it. Now,
if she can’t raise enough money by May 18, she may lose her pioneering show on
the liberal Air America radio network.

In the self-syndicating corner of the radio world, Rosenberg acts
simultaneously as the producer, interviewer and chief fundraiser for "EcoTalk,"
which currently airs nightly in 20 Air America markets, including San Francisco
at 11 p.m. Air America  —  which is trying to claw its way out of bankruptcy
—  said it cannot finance the show, which draws a loyal but modest audience,
and come May 21 is shuffling its lineup to try to jump-start interest in its
struggling enterprise.

The network has given Rosenberg an option: pay or no play. To remain in a
weekend time slot for a year, she estimates she will need to raise $250,000
from sponsors, to cover production costs and salaries for a producer and blog
editor and for studio time. She’s hoping to raise $60,000 by May 18 to keep the
show on for at least the next few months, and then take it from there.

While Rosenberg finds herself at the confluence of two trends that have
received a lot of buzz  —  the green movement and progressive radio  —  she’s
also finding there isn’t a lot of cash to back up the sizzle. At least not at
her level of the green media food chain. It is one thing for Vanity Fair
magazine to produce an ad-thick green issue, as it did in May, or for former
Vice President Al Gore to pack the lecture circuit, but Rosenberg has
discovered, to her great dismay, that the market doesn’t yet have the depth to
support smaller environmental media.

As a broadcast journalist covering the environment full time, she also
doesn’t have overwhelming competition. Although the Society of Environmental
Journalists counts 62 radio journalists among its 1,384 members and National
Public Radio broadcasts its weekly "Living on Earth" program to 300 markets, in
addition to producing an in-depth, year-long series on climate change  —
Rosenberg, 51, is believed to have one of the few nationally broadcast radio
interview programs devoted exclusively to the planet’s issues.

"I’ve hung in there all this time and I think the green train is just
around the corner," said Rosenberg, who has produced environmental news reports
on KCBS-AM in San Francisco for a decade until this year. "But I’m not a
salesperson. I’m a journalist and an activist. But now I’m stuck trying to sell
ads to keep something I feel passionately about on the air."

When Air America began programming  in March 2004, Rosenberg approached
the network with the idea of a regular environmental program. It agreed, but
said it was her responsibility to find advertisers. Over the next few years,
she had moderate success finding funders, both commercial and nonprofit, to
finance the then-weekend program, whose Web site is www.ecotalkblog.com.

Last fall, when "EcoTalk" moved to a nightly spot, the network agreed to
pick up more responsibility for ad sales. But the landscape changed in October
when Air America filed for Chapter 11 bankruptcy protection. Since then,
Rosenberg has been largely subsidizing the program’s cost. And she said that
her husband, a lawyer  who runs a San Francisco legal financing firm, has been
supportive. "He told me that I have to practice what I preach: My show has to
be sustainable," she said.

It is important to Rosenberg that the show airs to a national audience,
ensuring that the topics discussed are heard beyond the green-friendly Bay
Area. Or, as Rosenberg is fond of saying, "My goal is greening the red and blue
states one show at a time." She’s been a street activist as well, trying to
reach the soccer-mom audience by co-founding a group called "Don’t Be Fueled:
Mothers for Clean and Safe Vehicles." In 2002, the Marin County resident traded
in her Mercedes 320 SUV for a Toyota Prius.

"Betsy is hard-working and obsessively passionate about the environment,
and commendably so," said Bob Agnew, program director for San Francisco’s
KQKE-AM, one of Air America’s top five markets. Upon hearing about how much of
her own money Rosenberg has invested in its survival, Agnew said, "Wow."

Throughout the sponsorship turmoil, the movement’s heavy hitters have
appeared on "EcoTalk"  —  from politicians like Gore and Sen. Barbara Boxer,
D-Calif., to eco-friendly celebrities like Darryl Hannah and Body Shop founder
Anita Roddick.

"Her range of guests and topics has been great and she plays an important
role in the movement," said Chip Giller, president of Grist.org, a popular
online environmental Web site whose motto is "gloom and doom with a sense of
humor."

"But right now the question is whether we have reached a tipping point (in
green media) or whether this is part of an 18-month ride after (Gore’s
documentary about climate change) ‘An Inconvenient Truth.’ The next two or
three years will show whether green is here to stay. I certainly hope it is,"
Giller said.

The problem is, Air America can’t wait that long.

"I’m taking this day to day," said Air America Chief Operating Officer
Scott Elberg. The content of the "EcoTalk" isn’t a problem, he said. The show
has 50,600 listeners in its current nightly time slot, according to Arbitron
ratings, and airs in 22 markets, down from a high of 40.

"We love Betsy, we think she’s a star, and we’d love to find a way to
continue to work with her," Elberg said. "But we didn’t get the traction that
we needed to with that show (in the nightly time slot)." While Elberg hopes the
green market flourishes, right now he isn’t seeing it turn into ad dollars, at
least on his network, whose liberal outlook would seem to be a natural vehicle
for environmentally friendly companies looking to advertise.

"There’s a lot of talk about it," Elberg said, "but I have yet to see the
corporate dollars follow it."